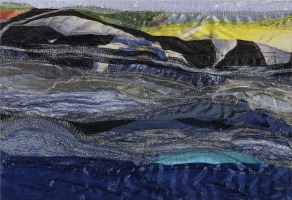 Annie is currently putting the finishing touches to Glimpses, her forthcoming solo exhibition in Reykjavic in September.

We have had the opportunity of a preview of the artwork which will soon be packed up in those special crates that have been generously loaned by Graham Roberts of Ballast Quay House, then to be transported by the Eimskip Shipping Company to Reykjavic.

Shipping out is scheduled for August 17. James Barnard, who is currently working at Tate Modern, is in charge of the packing and transportation, and will be travelling to Iceland with Annie to hang the Bielecka exhibition.

James Dodds has given the benefit of his own vast experience of setting up shows, and Catherine Dodds has designed the catalogue. Glimpses is described as “An Exhibition of Decorative Textiles, Sea and Landscapes”; alternatively, it is “Vefnadur, skrautlist og bningar”, you can take your pick.

At the preview in Annie’s house in Wivenhoe, we were able to see and wonder at the array of meticulously framed textile works, from tiny gem-like cameos to major canvases. It is a shame that we are unable to reproduce the colours, such an important element of these works, for you here.

The larger compositions, on themes of land and waterscapes, show great confidence, with bands of textile of different pattern and colour and three-dimensional content; these freestyle landscapes, with their power and their colour, beg to be seen in clear light conditions (which no doubt will prevail in Reykjavic! )

Jan Le Fevre said “they have an element of drama and theatre which really suits Annie; the Welsh Woman is arriving!”

Icelandic Air are sponsoring her air travel and excess baggage allowance (for those last minute pieces of work that she may have to take). Husband Mark will be going with her to help in all sorts of ways.

The exhibition is to be opened by the British Ambassador to Iceland. Annie herself says “It is indeed a daunting task planning an exhibition overseas”. We wish her the greatest possible success with her exhibition Glimpses, and “Pob lwc!” (that’s Welsh).