Annie was born and raised in the Welsh speaking community of Criccieth, Gwynedd. She now lives on the banks of the River Colne in Wivenhoe, UK.
Her studio is in Ardleigh, Essex.

This comprehensive website of Annie’s work is in the permanent collection of Welsh artists at the National Library of Wales and other major British library archives.

“Grace, The Suffering of Women at a Time of War” will be shown from 27th May – 5th June 2022 at Criccieth Memorial Hall, (Neuadd Goffa) at the 100th Anniversary Celebrations of the 1922 Opening by The Prime Minister, David Lloyd George, MP (Caernarfonshire). 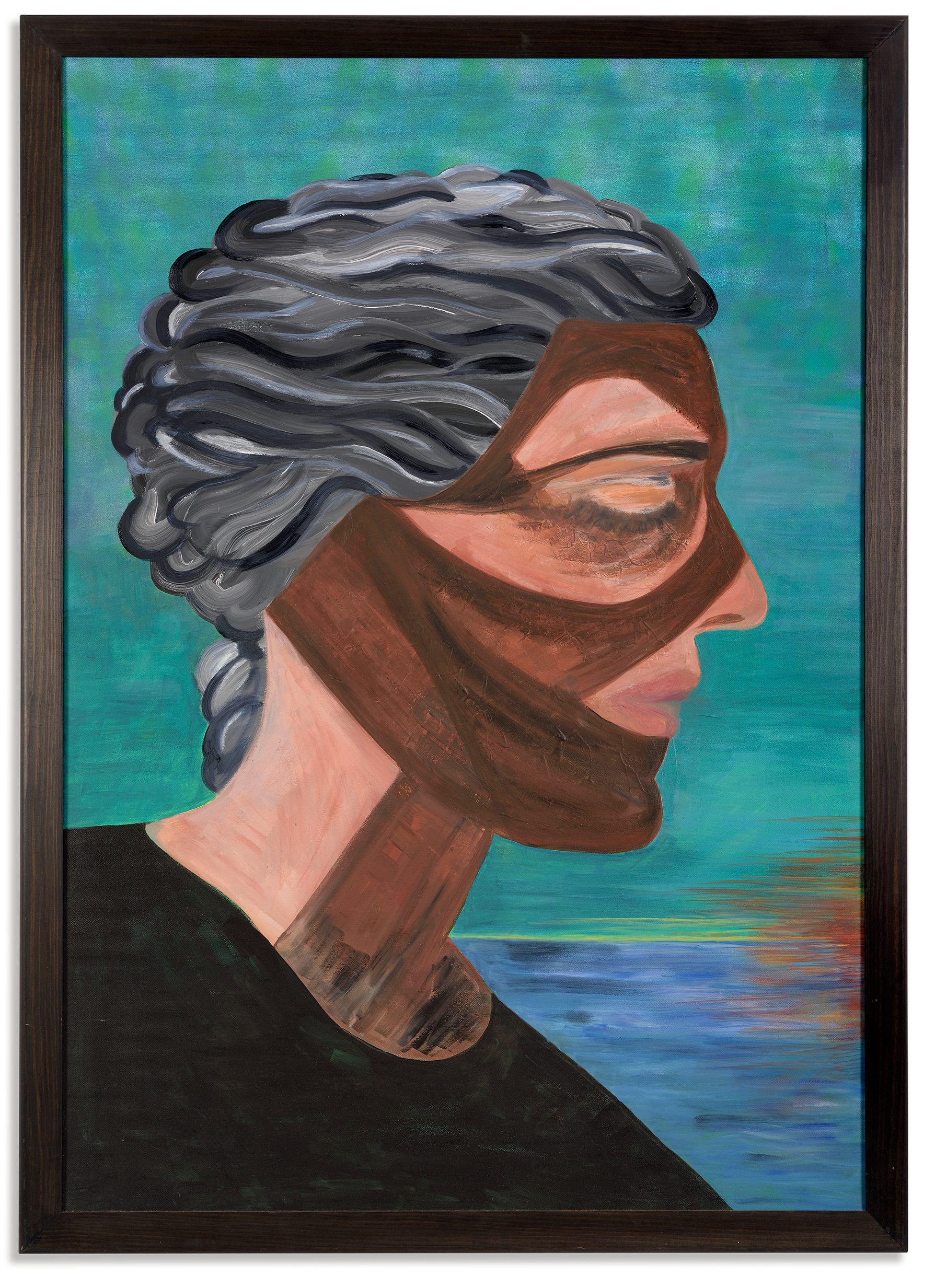 GRACE (BENDITH): THE SUFFERING OF WOMEN IN A TIME OF WAR 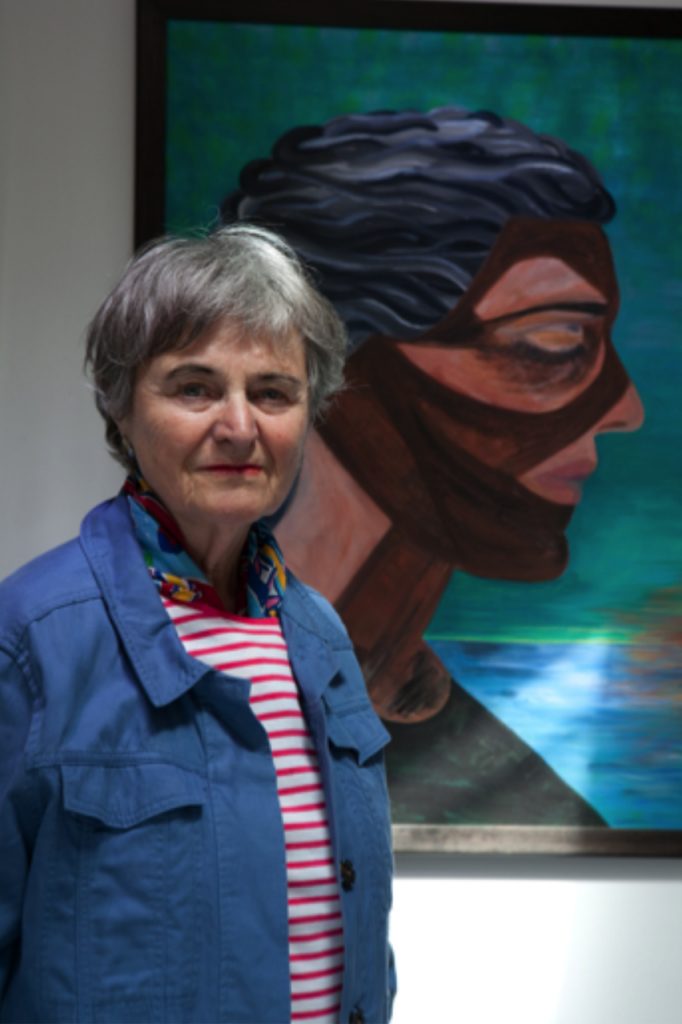 Annie, beside her painting ‘Grace (Bendith): The Suffering of Women in a Time of War’ (2003) Oil and acrylic 112x91cm.
Photo: Lee Karen Stow
Annie featured in a short radio piece about this painting when it was exhibited at the Welsh Senedd: 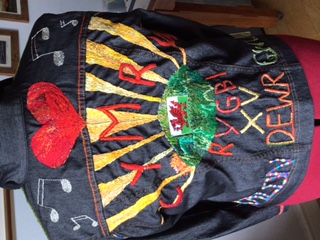 PAINTING WITH THREAD
Free embroidery on my rugby supporter’s denim jacket inspired by the teaching of Peter Gibson of Artwear, Hackney, London.
This was designed and started during lockdown 2020. It continues as a work in progress.
All words are in the Welsh language and are meaningful to our nation, team and supporters. 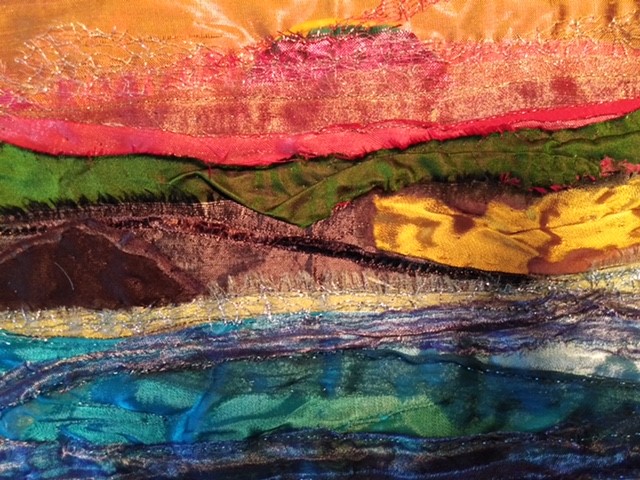 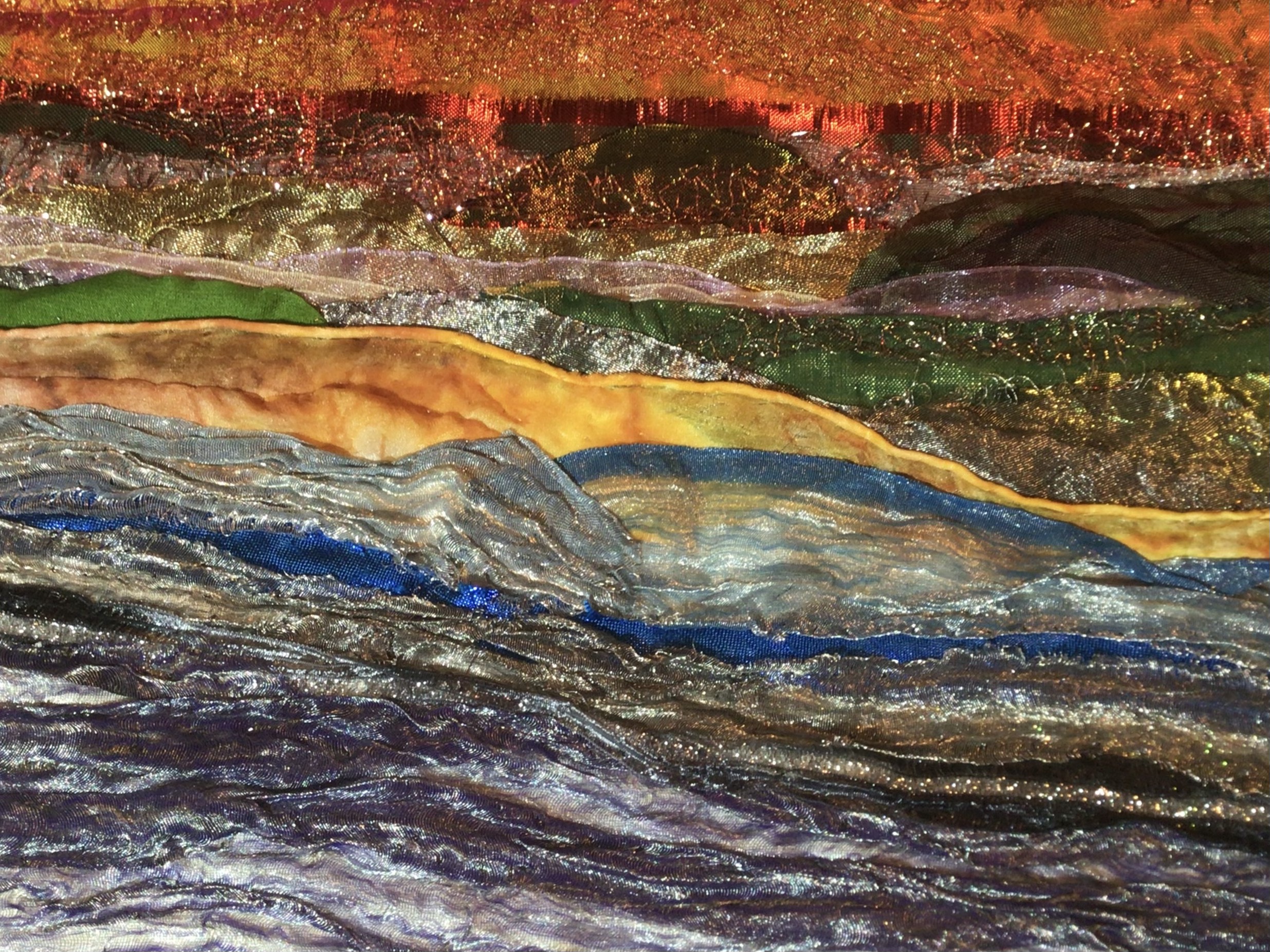 TUMULTUOUS SEAS / MOROEDD MAWR
Reflecting the difficult times our world is facing.
Image from Lockdown 2020 Textile Series for Solo Exhibition in UK in 2021. 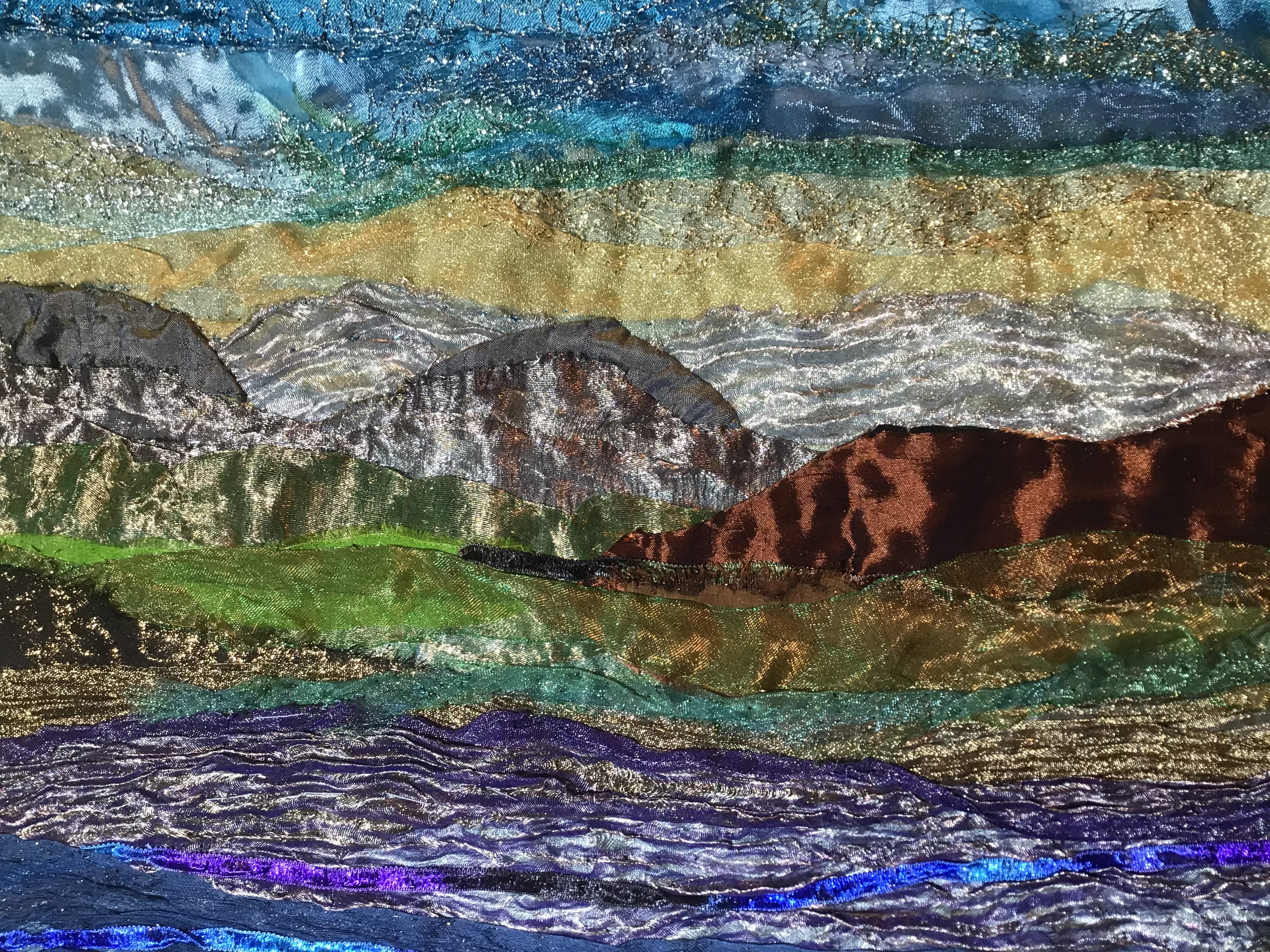 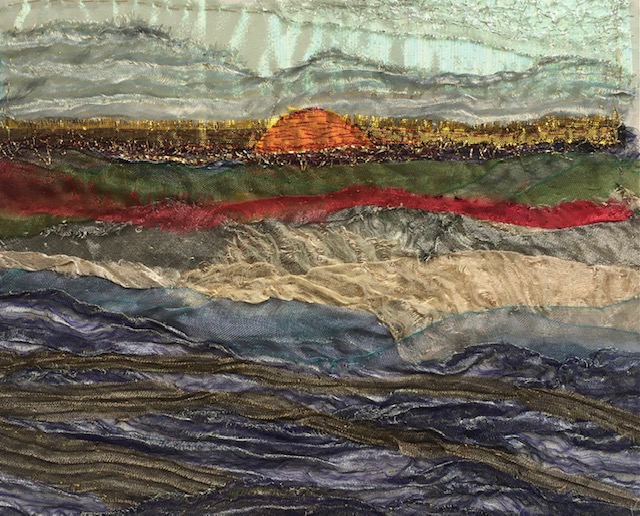 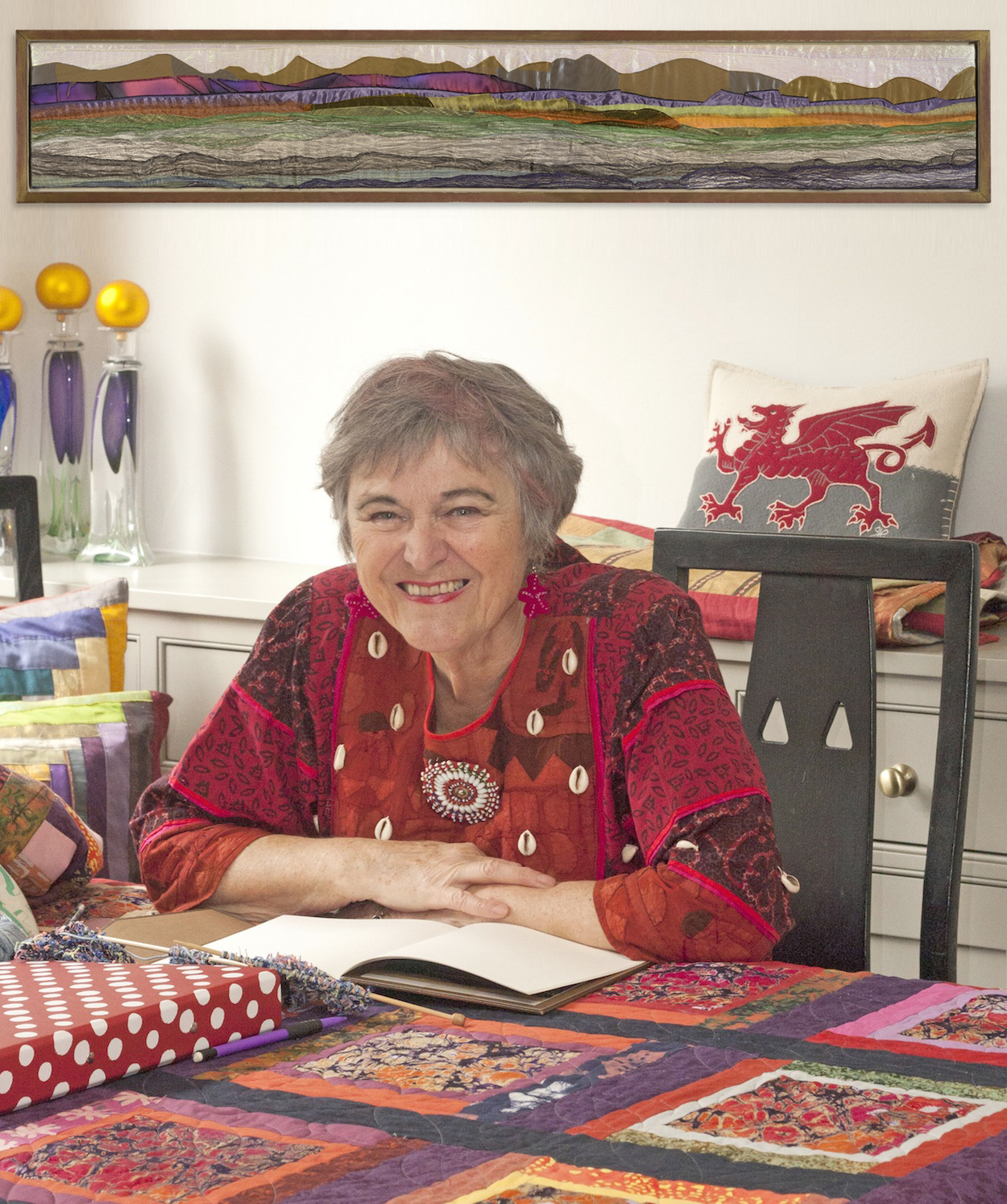 Annie’s work reflects her love of the sea and the timelessness of landscape. There are glimpses from afar of some real, some imaginary lands as seen from the ocean. There is a thread of ‘hiraeth’ (Welsh longing for home) woven into her work. 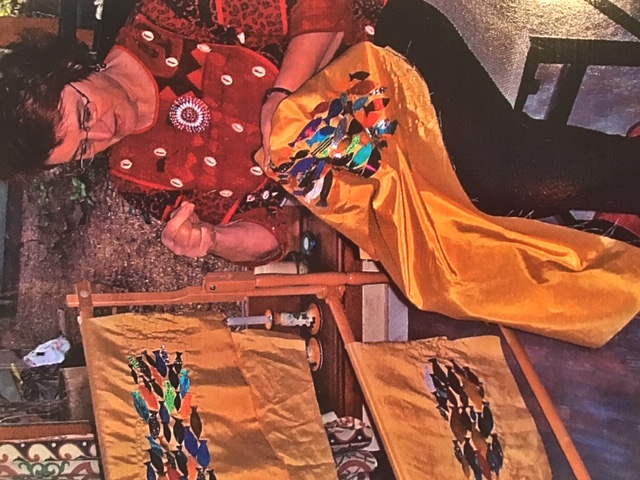 Commissioned altar frontal and side hangings designed and handmade for St. Mary’s Church, Wivenhoe. This popular image was adapted and used for chasuble commission for St. John the Divine Cathedral, New York.

Annie uses highly decorative techniques crossing the boundary between fine and applied art. The work includes paintings, church hangings and robes, costumes, framed land and seascapes. She uses fabrics that are difficult to combine, silk, satins and metallic fibres that reflect light and animate the surface. Strong colours inspire her, textures and raw edges give depth and dimension. Some materials used are recycled from costumes, the smallest pieces shaped into shoals of gleaming tropical fish.

Looking at Snowdonia over the Menai Straits, Gwynedd

“On the riverfront we found the work of Annie Bielecka, I loved her work, made in textiles, it’s full of colour and movement. I was really fascinated by how the textiles were used to create artworks, I did a bit of research about the artist and learned that she considers these to be painting with textiles and they certainly look that way. Bielecka does also work in paint and I was particularly drawn to this image, [Painted Quilt 2]. There’s so much in it, the grid made me think of Agnes Martin but this is not about rigidity, it’s much more joyful and uplifting. Full of colour, I loved the pieces of iridescent shell and bits of thread all seemingly interconnected with little golden dots.” – Gallery Tart Review 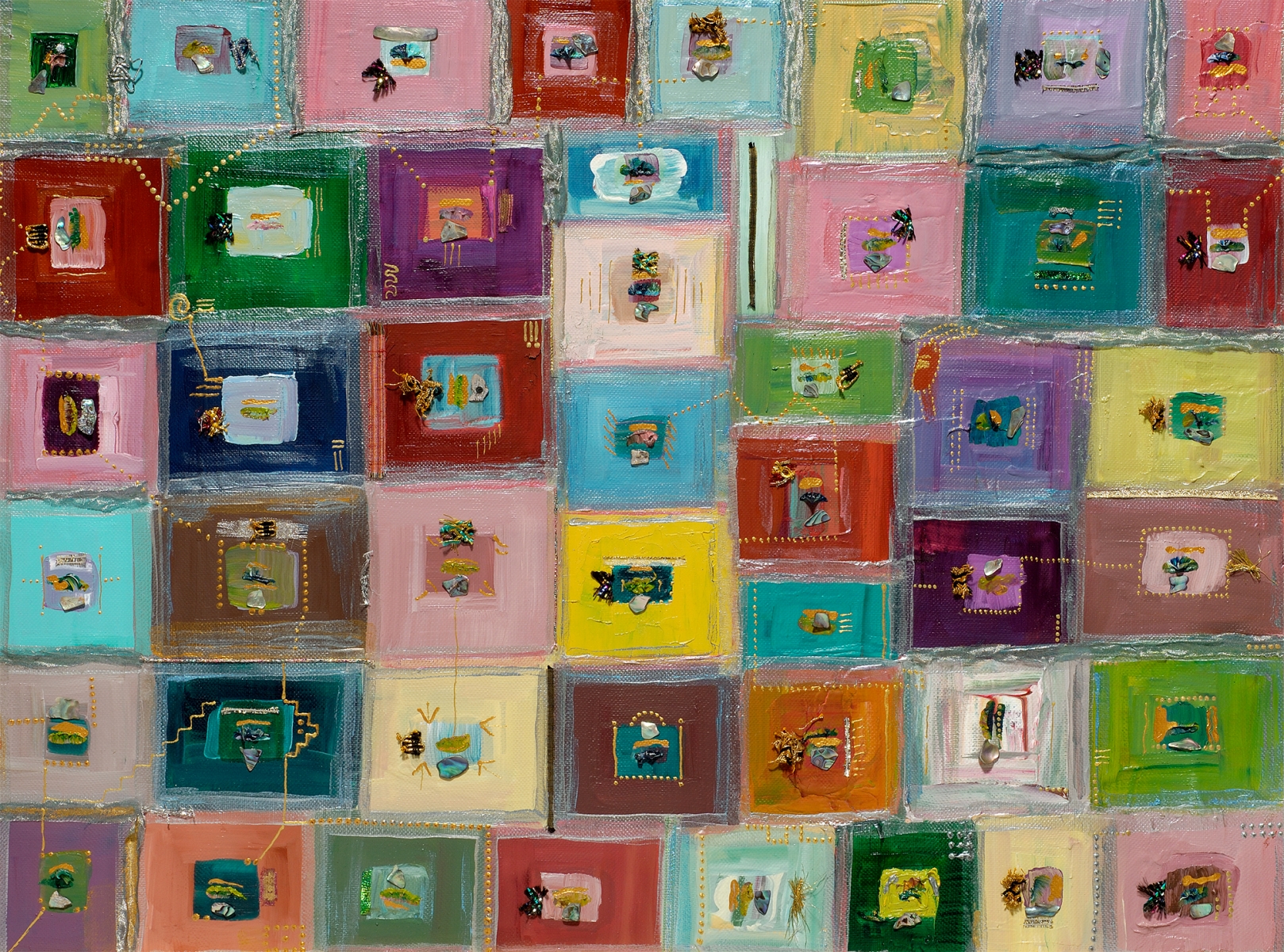